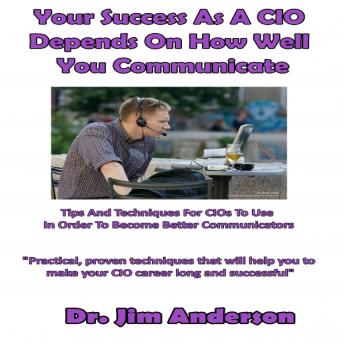 Your Success as a CIO Depends On How Well You Communicate: Tips and Techniques for CIOs to Use in Order to Become Better Communicators

When we think about what it takes to be a successful CIO, there are a lot of things that probably come to mind. Staying on top of changing technology, anticipating security issues, and preparing the IT department for the company's growth. However, it turns out that there is something that is far more important than any of these things to a CIO's success: the ability to clearly communicate.


What You'll Find Inside:


CIOS SHOULD STOP SENDING EMAILS - NOW!
CIO LESSONS FROM ZYNGA: DON'T MANAGE LIKE THEY DO!
WHAT A CIO NEEDS TO KNOW ABOUT CREATING A TWITTER STRATEGY
HOW CIOS CAN MAKE SOCIAL MEDIA WORK FOR THEM, NOT AGAINST THEM


One of the first things that any CIO needs to understand is that email is not their friend. It is a powerful tool, but it can be overused. We need to look at different companies and see what they are doing correctly - and wrong. We are living in the age of social media and as the company's CIO you are going to have to find ways to make these tools work for you, not against you.


When it comes to social media, because there are now so many different tools, a CIO is going to have to take the time to create a plan for how to maximize the value of each tool. At the same time it is going to be the CIOs responsibility to make sure that each of the members of the IT department feel satisfied in their job. To make this happen, the CIO is going to have to become a good communicator in the office.


Communication can take on many different forms for a CIO. One of the more common forms is that of negotiation. No matter if it is with workers, other departments, or vendors this is a skill that every CIO needs to have. Another communication skill that a CIO has to have is the ability to give a speech to a room full of people. This can be tricky to do well, but as with all such things, it is something that can be learned with practice.


The job of CIO is something that is being done every day at just about every company. As CIO we need to understand that we can learn from the experiences that our peers have had and we can adopt some of their strategies inside of our companies. When we go to communicate with our teams and peers we'll have to keep in mind that the words that we choose to use will determine how much power and credibility we will be given.


The good news about communication for CIOs is that this is a skill that can be learned. If we're willing to take the time and commit ourselves to becoming better communicators, then we can become more successful CIOs.

Your Success as a CIO Depends On How Well You Communicate: Tips and Techniques for CIOs to Use in Order to Become Better Communicators