Your Teacher Said What?!: Defending Our Kids from the Liberal Assault on Capitalism 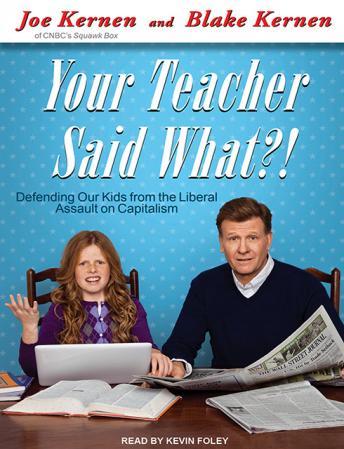 Every morning on CNBC's Squawk Box, Joe Kernen asks challenging questions. And at home he does the same with his young daughter, Blake. What are you learning in school? What TV shows do you like? What message did you get from that movie?

When Blake was nine, her answers told Joe that she had already absorbed a distorted view of economics-from her school, pop culture (even animated movies!), and just about everywhere else. She was learning that capitalism is unavoidably immoral, that business people can't be trusted, especially if they run big companies like BP or Wal-Mart, that trade is bad because it hurts American workers, and that no matter how bad things get, the government will always bail us out.

Joe admits that he shouldn't have been surprised in an era when Washington casually takes over car companies and spends a trillion dollars 'stimulating' the economy. But he was outraged and determined to do something about it. If he couldn't fix our education system or Hollywood, at least he could teach Blake how capitalism really works, and why it's worth defending.

He started by asking her to write down phrases she didn't understand ('What's physical stimulus?'). That led to discussions of some tricky ideas, like credit and the time value of money. In theory a dollar today is always worth more than a dollar next year-but not to someone whose purchases are always paid for by someone else.

Joe and Blake talked about the pluses (small) and minuses (huge) of unions-including the unionized teachers who disparage the free enterprise system that pays their salaries. They investigated the complicated process by which even the simplest manufactured items get made, without anyone directing from above. They puzzled out the truth about so-called fair trade: Rather than help poor farmers, it helps keep farmers pooor. They learned the differences between Europe and America, and why free health care isn't really free.

And they discovered what nine-year-olds have in common with grown-up progressives: Both love to regulate private behavior and think that anything bad-like smoking or eating too much fast food-should be prohibited by law.

Ultimately, Joe convinced Blake that capitalism isn't about greed; it's about freedom. As she writes in one of her sections: 'When I have to go to the store to buy a net for my aquarium (I have puffer fish) I can find a lot of nets, but no one told the store which ones to put on the shelf, and no one told the companies that make the nets how many to make, and no one told the companies that deliver the nets when to bring them. Or rather, everyone told them. Millions of ordinary people deciding what to buy and sell are smarter than even the hundred smartest people in the world.'

Your Teacher Said What?!: Defending Our Kids from the Liberal Assault on Capitalism