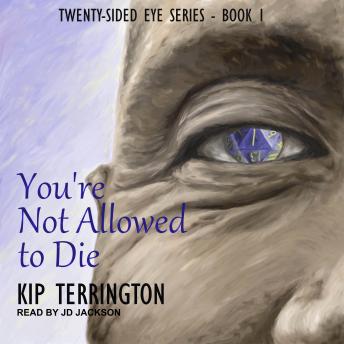 You're Not Allowed to Die

Joe's body is failing him. In order to make his last weeks of life more palatable, he goes into full digital immersion. This new process will allow him to play in a virtual environment with a fake, but healthy and strong virtual body. As soon as he steps into this new environment he meets his virtual assistant, an Evolving Intelligence (E.I.), who takes the form of someone close to him and goes by the name, Spooky. After explaining how the game will function, she gives him his first items.

Before Joe and Spooky can begin playing the game, they are both summoned to a reality where magic is real. Due to the coincidental timing of this event, Joe believes this is all just part of the digital immersion. He is unaware that the summoning has healed his real body, making him now truly young and powerful. As he still believes that he's dying, he lives every moment to the fullest, unaware that he is now a near immortal. What will happen to his assistant, the E.I., once placed in this new reality? Will they survive their new environment or will the myriad of dangers swallow them up?

You're Not Allowed to Die