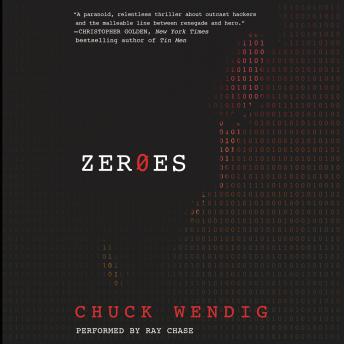 An exhilarating thrill-ride through the underbelly of cyber espionage in the vein of David Ignatius’s The Director and the television series Leverage, CSI: Cyber, and Person of Interest, which follows five iconoclastic hackers who are coerced into serving the U.S. government.

An Anonymous-style rabble rouser, an Arab spring hactivist, a black-hat hacker, an old-school cipherpunk, and an online troll are each offered a choice: go to prison or help protect the United States, putting their brains and skills to work for the government for one year.

But being a white-hat doesn’t always mean you work for the good guys. The would-be cyberspies discover that behind the scenes lurks a sinister NSA program, an artificial intelligence code-named Typhon, that has origins and an evolution both dangerous and disturbing. And if it’s not brought down, will soon be uncontrollable.

Can the hackers escape their federal watchers and confront Typhon and its mysterious creator? And what does the government really want them to do? If they decide to turn the tables, will their own secrets be exposed—and their lives erased like lines of bad code?

Combining the scientific-based, propulsive narrative style of Michael Crichton with the eerie atmosphere and conspiracy themes of The X-Files and the imaginative, speculative edge of Neal Stephenson and William Gibson, Zer0es explores our deep-seated fears about government surveillance and hacking in an inventive fast-paced novel sure to earn Chuck Wendig the widespread acclaim he deserves.