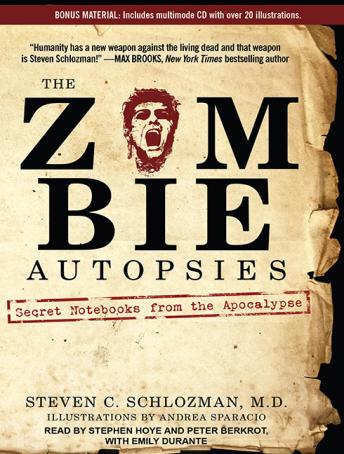 The Zombie Autopsies: Secret Notebooks from the Apocalypse

On a remote island a crack medical team has been sent to explore a radical theory that could uncover a cure for the epidemic of walking dead. Based on the team's research and the observations of renowned zombie expert Dr. Stanley Blum, The Zombie Autopsies documents for the first time the unique biology of zombie organisms.Detailed drawings of the internal organs of actual zombies provide an accurate anatomy of these horrifying creatures. Zombie brains, hearts, lungs, skin, and digestive system are shown, while Dr. Blum's notes reveal shocking insights into how they function-even as Blum and his colleagues themselves begin to succumb to the plague.No one knows the ultimate fate of Dr. Blum or his researchers. But now that his notebook, The Zombie Autopsies, has been made available to the UN, the World Health Organization, and the general public, his scientific discoveries may be the last hope for humans on earth.