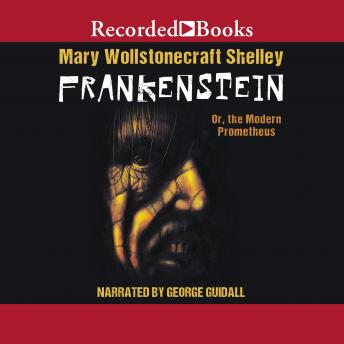 On the deck of his ice-imprisoned ship, explorer Robert Walton watches from a great distance as an enormous apparition travels with much haste across the frozen shore. The next day, Walton fishes from the sea a melancholy scientist named Frankenstein, who shares with Walton the horrifying account of his life and of the 'hideous progeny' he set loose upon the world. Frankenstein was written while 19-year-old Mary Shelley vacationed in Geneva with poets Percy Bysshe Shelley and Lord Byron. An incessantly rainy summer prompted Byron to challenge the members of the party to write a tale of the supernatural. While listening to a discussion concerning the theory of electrical reanimation, Mary Shelley was struck, almost to terror, with the idea for Frankenstein: 'The idea so possessed my mind that a thrill of fear ran through me, and I wished to exchange the ghastly image of my fancy for the realities around .' A universal classic, Mary Shelley's romantic tale of an ambitious doctor who places himself in the dangerous role of God was first published anonymously in 1818. Master narrator George Guidall skillfully brings to life the doctor and his unhappy creation.