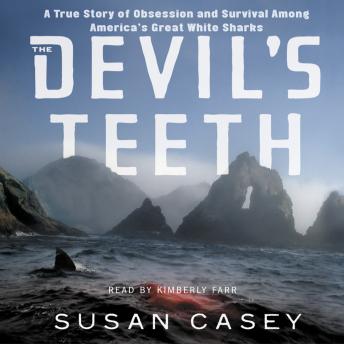 The Devil's Teeth: A True Story of Survival and Obsession Among America's Great White Sharks

Travel thirty miles north, south, or east of San Francisco city hall and you'll be engulfed in a landscape of thick traffic, fast enterprise, and six-dollar cappuccinos. Venture thirty miles due west, however, and you will find yourself on what is virtually another planet: a spooky cluster of rocky islands called the Farallones. Journalist Susan Casey was in her living room when she first glimpsed this strange place and its resident sharks, their dark fins swirling around a tiny boat in a documentary. These great whites were the alphas among alphas, the narrator said, some of them topping eighteen feet in length, and each fall they congregated here off the northern California coast. That so many of these magnificent and elusive animals lived in the 415 area code, crisscrossing each other under the surface like jets stacked in a holding pattern, seemed stunningly improbably–and irresistible.

Within a matter of months she was in a seventeen-foot Boston Whaler, being hoisted up a cliff face onto the barren surface of Southeast Farallon Island–part of the group known to nineteenth-century sailors as the "Devil's Teeth." There she joined the two biologists who study the sharks, bunking down in the island's one habitable building, a haunted, 120-year-old house spackled with lichen and gull guano. Less than forty-eight hours later she had her first encounter with the famous, terrifying jaws and was instantly hooked. The Devil's Teeth offers a rare glimpse into the lives of nature's most mysterious predators, and of those who follow them. Here is a vivid dispatch from an otherworldly outpost, a story of crossing the boundary between society and an untamed place where humans are neither wanted nor needed.