The War Of The Worlds (Classic Radio Sci-Fi) 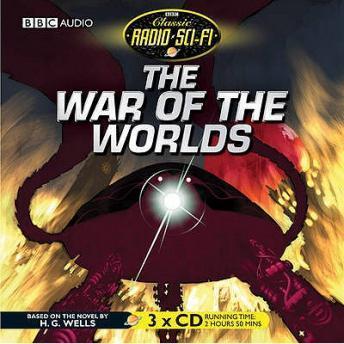 'They came in cylinders as dreaded falling stars; they were the ultimate killing machines...' When a Martian spacecraft crash-lands near Woking, mankind is terrorised by aliens in tall, armoured capsules that stalk the countryside on three legs. The frightening machines wreak havoc on London and the Southern Counties with their heat-rays, and survivors are driven underground. Yet it all began in the calm of an observatory... While scanning the heavens, scientist John Nicholson sees a shower of meteorites heading towards Earth. But what he is witnessing is, in fact, the beginnings of an invasion. Soon, dense black smoke wipes out vast numbers of the population and Nicholson tells how he was plunged into a paralysing nightmare of stark terror and utter destruction. Martin Jarvis, Peter Sallis and Anthony Jackson also feature in this thrilling six-part, full-cast dramatisation of H.G. Well's classic novel - an immensely atmospheric recording based on one of the most influential stories ever told.