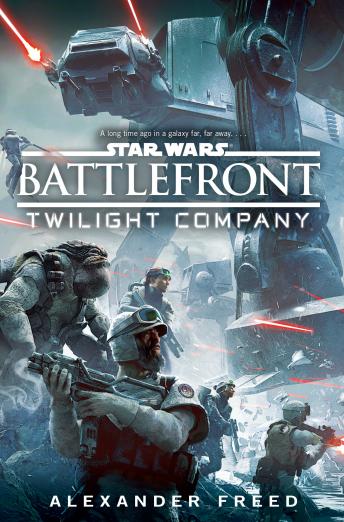 NAMED ONE OF THE BEST BOOKS OF THE YEAR BY BUZZFEED • A companion novel inspired by Star Wars: Battlefront, this action-packed adventure follows a squad of soldiers caught in the trenches of the ultimate galactic war between good and evil.

The bravest soldiers. The toughest warriors. The ultimate survivors.

Among the stars and across the vast expanses of space, the Galactic Civil War rages. On the battlefields of multiple worlds in the Mid Rim, legions of ruthless stormtroopers—bent on crushing resistance to the Empire wherever it arises—are waging close and brutal combat against an armada of freedom fighters. In the streets and alleys of ravaged cities, the front-line forces of the Rebel Alliance are taking the fight to the enemy, pushing deeper into Imperial territory and grappling with the savage flesh-and-blood realities of war on the ground.

Leading the charge are the soldiers—men and women, human and nonhuman—of the Sixty-First Mobile Infantry, better known as Twilight Company. Hard-bitten, war-weary, and ferociously loyal to one another, the members of this renegade outfit doggedly survive where others perish, and defiance is their most powerful weapon against the deadliest odds. When orders come down for the rebels to fall back in the face of superior opposition numbers and firepower, Twilight reluctantly complies. Then an unlikely ally radically changes the strategic equation—and gives the Alliance’s hardest-fighting warriors a crucial chance to turn retreat into resurgence.

Orders or not, alone and outgunned but unbowed, Twilight Company locks, loads, and prepares to make its boldest maneuver—trading down-and-dirty battle in the trenches for a game-changing strike at the ultimate target: the very heart of the Empire’s military machine.

“A novel that ties in to a video game based on a sprawling sci-fi franchise shouldn’t be this good. . . . Battlefront: Twilight Company effortlessly thrusts readers onto the frontlines of the Galactic Civil War in a gripping tale.”—New York Daily News

“Compelling . . . an entertaining journey through a galaxy in turmoil . . . Battlefront: Twilight Company explores what happens to the cannon fodder fighting and dying in the background of space opera’s cinematic action sequences. Focusing on the life of a few low-ranking Rebel grunts caught up in a vast interstellar conflict, the novel is an enjoyable tale of interstellar adventure and drama.”—IGN

“A military thriller [with] some pretty impressive actions scenes [and] the lived-in, gritty feel of the original trilogy . . . [Alexander] Freed shows us the military side of the Star Wars universe in a way that we haven’t seen much before, while also giving readers new perspectives on classic characters and moments.”—Tech Times

“Twilight Company is one of the greatest Star Wars stories ever about someone doggedly, cynically coming to understand why acting according to the light side is important.”—Den of Geek

“The strongest canon piece of Star Wars literature thus far . . . sure to be a fan-pleasing favorite . . . Explosive action scenes and dark humor only punctuate this character-driven tale [with] heavy world-building and cameos from other characters throughout the Star Wars pantheon.”—Alternative Nation