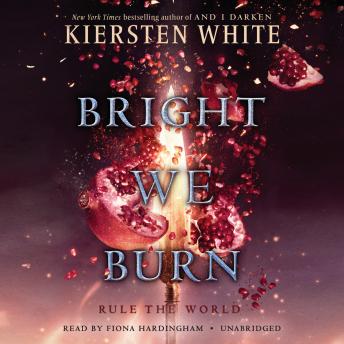 The tumultuous, edge-of-your-seat conclusion to the New York Times bestselling AND I DARKEN series--the epic saga that reads like Game of Thrones . . . if it were set in the Ottoman Empire. Who will live? Who will die? And who will rule triumphant?

Haunted by the sacrifices he made in Constantinople, Radu is called back to the new capital. Mehmed is building an empire, becoming the sultan his people need. But Mehmed has a secret: as emperor, he is more powerful than ever . . . and desperately lonely. Does this mean Radu can finally have more with Mehmed . . . and would he even want it?

Lada's rule of absolute justice has created a Wallachia free of crime. But Lada won't rest until everyone knows that her country's borders are inviolable. Determined to send a message of defiance, she has the bodies of Mehmed's peace envoy delivered to him, leaving Radu and Mehmed with no choice. If Lada is allowed to continue, only death will prosper. They must go to war against the girl prince.

But Mehmed knows that he loves her. He understands her. She must lose to him so he can keep her safe. Radu alone fears that they are underestimating his sister's indomitable will. Only by destroying everything that came before--including her relationships--can Lada truly build the country she wants.

Claim the throne. Demand the crown. Rule the world.

'Exciting, complex, and faithful to the feelings that drive human beings in love and conflict. . . . Highly recommended.' --SLJ


PRAISE FOR NOW I RISE:


PRAISE FOR AND I DARKEN:

'A dark jewel of a story, one that gleams with fierce, cunning characters--absolutely riveting.' --Alexandra Bracken, #1 New York Times bestselling author of Passenger

'A dark, gritty, and seriously badass epic that will have you dying for more . . . required reading for every feminist fantasy fan.' --BuzzFeed