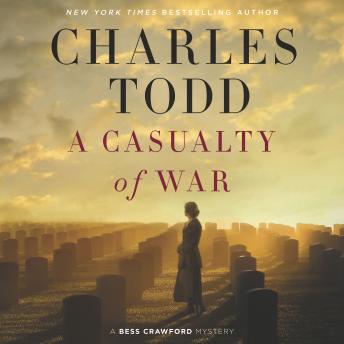 A Casualty of War: A Bess Crawford Mystery

From New York Times bestselling author Charles Todd comes a haunting tale that explores the impact of World War I on all who witnessed it—officers, soldiers, doctors, and battlefield nurses like Bess Crawford.

Though the Great War is nearing its end, the fighting rages on. While waiting for transport back to her post, Bess Crawford meets Captain Alan Travis from the island of Barbados. Later, when he’s brought into her forward aid station disoriented from a head wound, Bess is alarmed that he believes his distant English cousin, Lieutenant James Travis, shot him. Then the Captain is brought back to the aid station with a more severe wound, once more angrily denouncing the Lieutenant as a killer. But when it appears that James Travis couldn’t have shot him, the Captain’s sanity is questioned. Still, Bess wonders how such an experienced officer could be so wrong.

On leave in England, Bess finds the Captain strapped to his bed in a clinic for brain injuries. Horrified by his condition, Bess and Sergeant Major Simon Brandon travel to James Travis’s home in Suffolk, to learn more about the baffling relationship between these two cousins.

Her search will lead this smart, capable, and compassionate young woman into unexpected danger, and bring her face to face with the visible and invisible wounds of war that not even the much-longed for peace can heal.