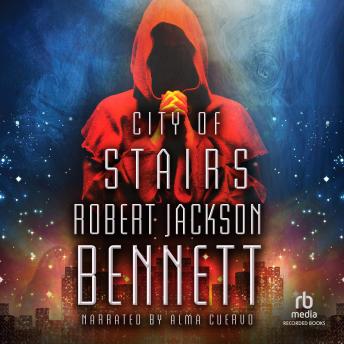 An atmospheric and intrigue-filled novel of dead gods, buried histories, and a mysterious, protean city--from one of America's most acclaimed young fantasy writers. The city of Bulikov once wielded the powers of the gods to conquer the world, enslaving and brutalizing millions-until its divine protectors were killed. Now Bulikov has become just another colonial outpost of the world's new geopolitical power, but the surreal landscape of the city itself-first shaped, now shattered, by the thousands of miracles its guardians once worked upon it-stands as a constant, haunting reminder of its former supremacy. Into this broken city steps Shara Thivani. Officially, the unassuming young woman is just another junior diplomat sent by Bulikov's oppressors. Unofficially, she is one of her country's most accomplished spies, dispatched to catch a murderer. But as Shara pursues the killer, she starts to suspect that the beings who ruled this terrible place may not be as dead as they seem-and that Bulikov's cruel reign may not yet be over.

Brilliant book, but I can't say much about the Narrator. She can't do male voices... at all. they all have what can only be best described as "Shatner pauses" That thing where they... speak... with... pauses... between... each... and... every... word. When dealing with characters like Sigrud it makes him come across as, well... stupid, which he is most definitely not. She voices female characters with inflection and does a great job there, but... ugh... her cadence on male voices is so off putting. In fact, if I didn't purchase all three books already on my wife's bidding (Considering the 3rd book is following a male lead), I would read the last two in paperback instead. This book is definitely well done and well worth the read, the narration, however, only diminishes it.

I dont know if its the writing, or the naration, but I was never able to get into it. Hard listen.

Worthy of a lazy weekend

Not sure if it was the narrator or the recording but it seemed like there were missed words. Otherwise I was ok with the narration. The weaving of gods, politics, mythology and intrigue was wonderfully done. The story did come to life in my mind but I was able to guess several key points before they were made - and that frustrated me.

A bit of a political thriller, a bit of a murder mystery, a bit of a fantasy/horror novel, and terrific world building. Loving this. I will definitely get the next in the series. And no complaints about the narrator - she does a fine job and her voicing of Sigrud is true to the character IMO. And let's be honest, male narrators almost universally make female characters sound like idiots and nobody complains about that - so suck it up!

I loved this book! The politics was not boring as they can be and it was a thrilling adventure from start to finish. I also enjoyed the narrator and her voices for each member of the party. She definitely can do male voices and do them well. She does have some style choices to give them each their own unique voice and I enjoyed that.

I listened for a couple of hours and could never get into it! Told so many backdrops that the story was hidden. Finally stopped. Waste of time.

I heard about this book 2 days ago and binged the whole thing over vacation. The politics are so well done instead of being the boring part they really bring things together. The mystery part is so well accompanied by the action scenes it really creates that suspense i generally look for. 9 out of 10 would recommend. The Narrator can in fact do satisfactory male voices, the one more softer male voice is clearly a style choice and I hope to hear more from her as well.