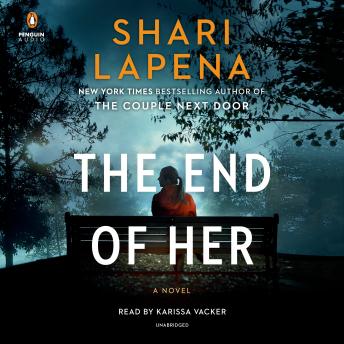 The End of Her: A Novel

“The End of Her will keep you guessing right up to the end . . . once you pick it up, you will not want to put it down.” —USA Today

A long-ago accident—and a visitor from out of the blue. . .

Stephanie and Patrick are adjusting to life with their colicky twin girls. The babies are a handful, but even as Stephanie struggles with the disorientation of sleep deprivation, there's one thing she's sure of: she has all she ever wanted.

Then Erica, a woman from Patrick's past, appears and makes a disturbing accusation. Patrick had always said his first wife's death was an accident, but now Erica claims it was murder.

Patrick insists he's innocent, that this is nothing but a blackmail attempt. Still, Erica knows things about Patrick--things that make Stephanie begin to question her husband. Stephanie isn't sure what, or who, to believe. As Stephanie's trust in Patrick begins to falter, Patrick stands to lose everything. Is Patrick telling the truth--is Erica the persuasive liar Patrick says she is? Or has Stephanie made a terrible mistake?

How will it end?

Shari Lapena never disappoints! There's always someone lurking waiting and plotting for the next come up, and in this story it's Erica. Chile, this one's a page turner. What I didn't expect is for Patrick's wife to...... now how would I look telling you the whole story

I enjoyed the story, it I’m a stickler for a resolved and satisfying ending. Sure missed the mark on the one. I realize any of the characters could be guilty, but the ending was rushed and abrupt

Wish there was more character development in this story. Some of it was ridiculous!

Shari has quickly become a favorite of mine and this book is no exception. The cat and mouse chase is on when a woman from Patrick's past comes back with a deep dark secret about Patrick's first wife's death. Stephanie his current wife and mother to their twin girls no longer knows what to believe. is her husband as innocent as he claims, or is there some grain of truth to what this woman is saying. Great twist and turns and written wonderfully.

This book droned on for way too long only to conclude with an extremely unrealistic and unbelievable twist. The story line was vacuous and the ending was silly.

Enjoyed this book from beginning to end. Such an entertaining book with twist & turns. Narrator also did a great job!

Great book! Loved the narrators. What a twister at the end.