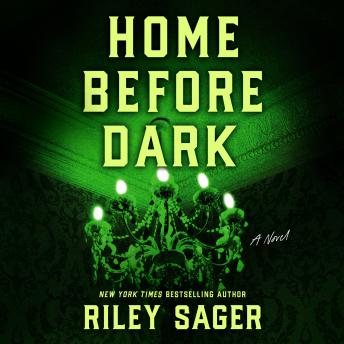 “A haunted house story—with a twist….[Sager] does not hold back”(Rolling Stone) in this chilling thriller from the author of Final Girls and Survive the Night.

Every house has a story to tell and a secret to share.

Twenty-five years ago, Maggie Holt and her parents moved into Baneberry Hall, a rambling Victorian estate in the Vermont woods. Three weeks later they fled in the dead of night, an ordeal her father recounted in a memoir called House of Horrors. His story of supernatural happenings and malevolent spirits became a worldwide phenomenon, rivaling The Amityville Horror in popularity—and skepticism.

Maggie was too young to remember any of the horrific events that supposedly took place, and as an adult she doesn’t believe a word of her father’s claims. Ghosts, after all, don’t exist. When she inherits Baneberry Hall after his death and returns to renovate the place and sell it, her homecoming is anything but warm. The locals aren’t thrilled that their small town has been made infamous, and human characters with starring roles in House of Horrors are waiting in the shadows.

Even more unnerving is Baneberry Hall itself—a place where unsettling whispers of the past lurk around every corner. And as Maggie starts to experience strange occurrences ripped from the pages of her father’s book, the truth she uncovers about the house’s dark history will challenge everything she believes.

This is the second book from Riley Sager I have read/listened to and I have to say I am a HUGE fan. I will definitely be purchasing another.The twists I suspect always seem to play out and then add more leaving me stunned and in awe. Great haunted house story if you're into those. The team of narrators delivered greatly in the story as well.

Started nice but plot quickly went in circles without getting scary.

I loved the twist and turns of this thriller

I was not expecting that kinda twist! This is a excellent book!

A pretty good book that keeps your guessing.

Great story! So full of surprises.

I loved this book! It was so entertaining and had so many twists. Very enjoyable read, or listen.

The narrator is a excellent story teller!! She’s also a wonderful actress!!

It was disappointing for me. A nice book but not the best.

For me having 2 narrators in 2 different timelines was novel, & after awhile I appreciated why it was that way. It works! Fast paced scary tale that will hook you from the start!

this was awesome, I really enjoyed this book. The narrators did a great job.

About: Maggie has spent her whole life being teased and taunted or treated differently because of a book that her father wrote when she was little. One that she finally read and came to believe was completely false. She spent the rest of her childhood trying to figure out why her parents would lie and say that it was a true story. When her father dies, she finds out that he never sold the house that the book referenced. She takes it as an opportunity to finally get the answers she has asked for all her life. Plot: This was so inventive! I really loved how there were parts in Maggie's point of view and then parts that were part of the book referenced in Maggie's parts. It was so creative. It was almost like I was reading two books at one time. I was definitely on edge for most of this book. I'm not even going to lie! To add to it all, I got the bright idea to start reading this right at night! Characters: I really adore Maggie in this. She was just so determined. I get vibes that she may be a lesbian. I'm not sure. I would have liked to see a suspicion that I had in the book confirmed. I will just accept that I might be wrong. The mother was kind of a nightmare, but I get why she was the way she was. The rest of the characters played more in the background than anything. Some were hilarious though! Narration: This book was narrated by Cady McClain and Jon Lindstrom. I didn't listen to the full book in audiobook. I read a big chunk of it at work. But these narrators were really awesome. Jon was so authentic sounding that I felt like I was actually there in the story that was being woven! It was spooky! Suggestions: I'd of liked to see how she goes about her life in the end and to see some loose ends tied up. Other than that, nothing. Recommend: Yes! Be prepared to expect the unexpected.

It was a struggle to finish this book.