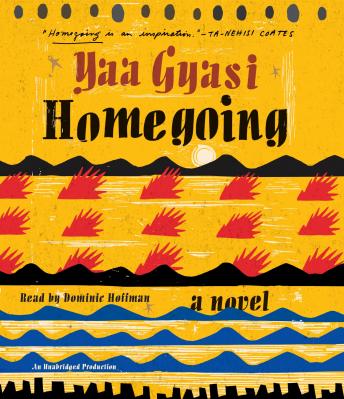 “Homegoing is an inspiration.” —Ta-Nehisi Coates


The unforgettable New York Times best seller begins with the story of two half-sisters, separated by forces beyond their control: one sold into slavery, the other married to a British slaver. Written with tremendous sweep and power, Homegoing traces the generations of family who follow, as their destinies lead them through two continents and three hundred years of history, each life indeliably drawn, as the legacy of slavery is fully revealed in light of the present day.

Effia and Esi are born into different villages in eighteenth-century Ghana. Effia is married off to an Englishman and lives in comfort in the palatial rooms of Cape Coast Castle. Unbeknownst to Effia, her sister, Esi, is imprisoned beneath her in the castle’s dungeons, sold with thousands of others into the Gold Coast’s booming slave trade, and shipped off to America, where her children and grandchildren will be raised in slavery. One thread of Homegoing follows Effia’s descendants through centuries of warfare in Ghana, as the Fante and Asante nations wrestle with the slave trade and British colonization. The other thread follows Esi and her children into America. From the plantations of the South to the Civil War and the Great Migration, from the coal mines of Pratt City, Alabama, to the jazz clubs and dope houses of twentieth-century Harlem, right up through the present day, Homegoing makes history visceral, and captures, with singular and stunning immediacy, how the memory of captivity came to be inscribed in the soul of a nation.

Includes a PDF of the Family Tree

Gorgeously written by the author and beautifully read by the narrator. I frequently listened to some passages multiple times just to savor the sound of the words. I would have given both the book and the narration 10 stars if that were possible.

An incredible and horrific tale of history, colonialism, and slavery.

It was a great book, in the beginning it was hard to get into, but later i loved it. I loved how each story tied into another showing the lineage back to the motherland. How proud the African culture was, the downfall when the colonizers came, the slavery, the false imprisonment and all the way to today. It showed the kids today going back home to where it all started, Great end!

This was immaculately written. I could see the amount if research that went into this novel. Presenting the different eras within Ghana/Gold Coast and the USA. I'm from Ghana myself and raised in the UK. I could really relate to Marjorie's story. That being said, the Narrator tried really hard with the west African accent but it was very off. It didn't take away at all so it was fine.

This is a beautifully written piece of art. It encompasses the essence of Africa, dictates the horrors of colonialism and the transatlantic slave trade. The author grabs your interest from the beginning to the end.

This book is amazing, but the narration in this audiobook was equally brilliant. The accents were so wonderful and gave such a delightful, subtle taste to the storytelling. This book is a beautiful audiobook. I'm so glad I "read" it this way.

I loved this book. I felt so connected to the characters as the story progressed. Such a great book!

A perfect, heart-wrenching read. I loved the history and the people introduced and intertwined. I have a long daily commute and it fully occupied me leaving me wondering how I even got to my destination safely - like a time warp. I found myself spending a lot of my breaks outside in my car just to continue listening and even missing the characters throughout the day. Well done!!!

Brilliant book beautifully delivered by the narrator. Deeply moving and eye-opening. A must read!

Amazing Book! Beautifully written and well narrated! A must read!

This was a fantastic book, both engaging and rich in history. A heat-breaking journey through generations of African descendants and a portrait of the consequences of systematic exclusion on subsequent generations. A very powerful first novel from an author whose wisdom is much beyond her years. Narration was brilliant, with subtle variations in tone and accent depending on whether the story was unfolding in America or Africa. A must-read.

One of the best audio books I've listed to this year! The narration is wonderful and actually adds to the experience - which I find rarely happens. Loved it.

Great book! Enjoyed listening on my way to and from work. Narrator was excellent.

A fabulous book The narrator could not have been better He was terrific and what a story and how beautiful it was written There was history,anguish love sorrow everything Some parts were difficult to listen to but those South Africans has a very sad hard life Each character was wonderful. Yes I will remember this Book

I listened to this book one year ago, as part of a book club. Incredible story, one that I still think about and discuss today. The story opened my eyes to the slave trading present even in Africa and gave me further appreciation for the history of people before our time. It made me think of my own family history and how I became to be as a result of their own stories. I usually don’t listen to books, as I prefer looking at the written words. However, time doesn’t usually let me indulge as much. I found the narrator, who skillfully used authentic sounding accents, to accentuate the words wonderfully, adding an element to the book that would not have been present in the print. I very highly recommend this book, though parts would not be suitable among children (and awkward around your parents).

This was a fantastic book!! I would recommend googling the character map as it will be helpful as the story evolves!!

*THIS REVIEW CONTAINS SPOILERS* Just finished reading Homegoing. Great book! It's historical fiction about two half sisters in Africa. The book spans 300 years and follows the sisters' decedents. One sister marries a British man in Africa