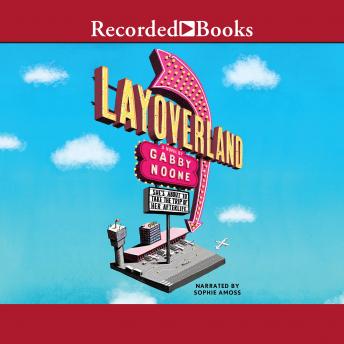 At least, that's what she believes. Her last day on Earth, she ruined the life of the person she loves most--her little sister, Emmy. So when Bea awakens from a fatal car accident to find herself on an airplane headed who knows where, she's confused, to say the least.

Once on the ground, Bea receives some truly harrowing news: she's in purgatory. If she ever wants to catch a flight to heaven, she'll have to help five thousand souls figure out what's keeping them from moving on.

But one of Bea's first assignments is Caleb, the boy who caused her accident, and the last person Bea would ever want to send to the pearly gates. And as much as Bea would love to see Caleb suffer for dooming her to a seemingly endless future of eating bad airport food and listening to other people's problems, she can't help but notice that he's kind of cute, and sort of sweet, and that maybe, despite her best efforts, she's totally falling for him.

From debut author Gabby Noone comes a darkly hilarious and heartfelt twist on the afterlife about finding second chances, first loves, and new friendships in the most unlikely places.

I enjoyed the characters in this book and the concept was interesting. I liked that it didn't have pat answers to difficult questions even though there were probably too many teen tropes for my taste. I was glad that it didn't cop out and make the all tied up in a ribbon happy ending that many authors would try for by making loopholes in the rules at the last minute for convenience sake. Even so, it was tied up in a more realistic (yet not unhappy) manner and I was satisfied with the ending. I gave it four stars instead of five solely because of the barely over done teen tropes. I gave the narration 5 stars because Sophie Amoss was flawless in her rendition of each character and her voice was never irritating. I would listen to her read again.

This book was a good listen. Light enough to read easily but with some interesting and poignant themes peppered throughout. Would have been a great summer beach read.

Enjoyed the story until it wandered into politics, painting anyone who wasn't progressive as an evil human.sadly, one of the main characters actually wants to hate his loving father simply because he is a conservative and his mother had convinced him that being a conservative is evil. It's a shame because the premise of the story was interesting and the politics added nothing to the story.