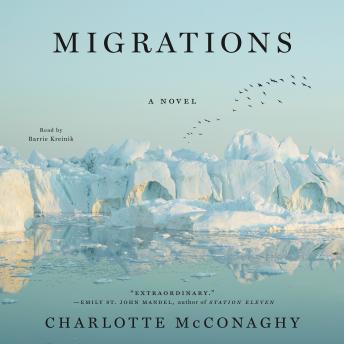 Franny Stone has always been the kind of woman who is able to love but unable to stay. Leaving behind everything but her research gear, she arrives in Greenland with a singular purpose: to follow the last Arctic terns in the world on what might be their final migration to Antarctica. Franny talks her way onto a fishing boat, and she and the crew set sail, traveling ever further from shore and safety. But as Franny’s history begins to unspool—a passionate love affair, an absent family, a devastating crime—it becomes clear that she is chasing more than just the birds. When Franny's dark secrets catch up with her, how much is she willing to risk for one more chance at redemption?

Epic and intimate, heartbreaking and galvanizing, Charlotte McConaghy's Migrations is an ode to a disappearing world and a breathtaking page-turner about the possibility of hope against all odds.

'Migrations is a nervy and well-crafted novel, one that lingers long after its voyage is over. It’s a story about our mingling sorrows, both personal and global, and the survivor’s guilt that will be left in their wake.' - New York Times Book Review

'True and affecting, elegiac and imminent...The fractured timeline fills each chapter with suspense and surprises, parceled out so tantalizingly that it took disciplined willpower to keep from skipping down each page to see what happens...Ultimately hopeful.' - The Washington Post

“Thrilling…In piecing together who this mysterious protagonist really is, McConaghy creates a detailed portrait of a woman on the cusp of collapse, consumed with a world that is every bit as broken as she is.” - TIME

Interesting premises but became overly complicated. The narrator did an excellent job with the varying accents.

What a wonderful story about love, people, adventures, with a twist that comes all the way back to the beginning