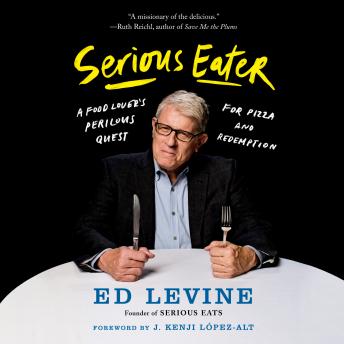 Original recipes by J. Kenji López-Alt of The Food Lab and Stella Parks of BraveTart

James Beard Award-winning founder of Serious Eats Ed Levine finally tells the mouthwatering and heartstopping story of building--and almost losing--one of the most acclaimed and beloved food sites in the world.

In 2005, Ed Levine was a freelance food writer with an unlikely dream: to control his own fate and create a different kind of food publication. He wanted to unearth the world's best bagels, the best burgers, the best hot dogs--the best of everything edible. To build something for people like him who took everything edible seriously, from the tasting menu at Per Se and omakase feasts at Nobu down to mass-market candy, fast food burgers, and instant ramen.

Against all sane advice, he created a blog for $100 and called it...Serious Eats. The site quickly became a home for obsessives who didn't take themselves too seriously. Intrepid staffers feasted on every dumpling in Chinatown and sampled every item on In-N-Out's secret menu. Talented recipe developers like The Food Lab's J. Kenji López-Alt and Stella Parks, aka BraveTart, attracted cult followings.

Even as Serious Eats became better-known--even beloved and respected--every day felt like it could be its last. Ed secured handshake deals from investors and would-be acquirers over lunch only to have them renege after dessert. He put his marriage, career, and relationships with friends and family at risk through his stubborn refusal to let his dream die. He prayed that the ride would never end. But if it did, that he would make it out alive.

This is the moving story of making a glorious, weird, and wonderful dream come true. It's the story of one food obsessive who followed a passion to terrifying, thrilling, and mouthwatering places--and all the serious eats along the way.

'Read[s] more like a carefully crafted novel than a real person's life.' --from the foreword by J. Kenji López-Alt

'Wild, wacky, and entertaining...The book makes you hungry for Ed to succeed...and for lunch.' --Christina Tosi, founder of Milk Bar

'Serious Eater is seriously good!...you'll be so glad [Ed] invited you to a seat at his table.' --Ree Drummond, author of The Pioneer Woman Cooks

'After decades of spreading the good food gospel we get a glimpse of the missionary behind the mission.' --Dan Barber, chef, Blue Hill and Blue Hill at Stone Barns


Includes a downloadable PDF of recipes.