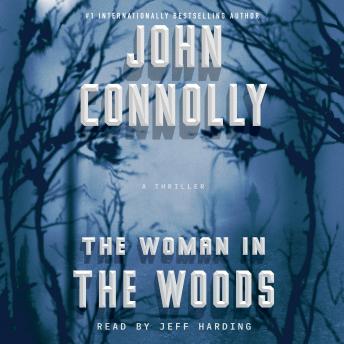 The Woman in the Woods: A Charlie Parker Thriller

“With its singular characters, eerie subject matter, and socko style” (The New York Times), this gripping thriller from the internationally bestselling author John Connolly follows Private Investigator Charlie Parker as he is hired to track down the identity of a dead woman—who apparently died in childbirth—and her missing child.

In the beautiful Maine woods, a partly preserved body is discovered. Investigators realize that the young woman gave birth shortly before her death. But there is no sign of a baby.

Private detective Charlie Parker is hired by a lawyer to shadow the police investigation and find the infant but Parker is not the only one searching. Someone else is following the trail left by the woman, someone with an interest in much more than a missing child…someone prepared to leave bodies in his wake.

And in a house by the woods, a toy telephone begins to ring and a young boy is about to receive a call from a dead woman.

With breathless pacing and shivery twists and turns, “this is Connolly’s masterpiece” (Publishers Weekly, starred review).

Dark, hard for me to fathom using some foul language, slow sometimes. A story I will remember.

The only thing worse than this book was the narration, which was with an indifferent tone, as if he was reading the News. The story was quite strange, and I found it difficult to connect with the characters.

A very different type of plot. I found myself fascinated and amazed at the twists.