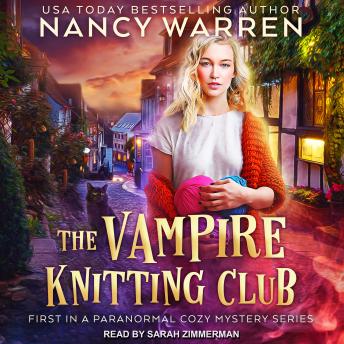 At a crossroads between a cringe-worthy past (Todd the Toad) and an uncertain future (she's not exactly homeless, but it's close), Lucy Swift travels to Oxford to visit her grandmother. With Gran's undying love to count on and Cardinal Woolsey's, Gran's knitting shop, to keep her busy, Lucy can catch her breath and figure out what she's going to do.

Except it turns out that Gran is the undying. Or at least, the undead. But there's a death certificate. And a will, leaving the knitting shop to Lucy. And a lot of people going in and out who never use the door-including Gran, who is just as loving as ever, and prone to knitting sweaters at warp speed, late at night. What exactly is going on?

When Lucy discovers that Gran did not die peacefully in her sleep, but was murdered, she has to bring the killer to justice without tipping off the law that there's no body in the grave. Between a hot 500-year-old vampire and a dishy detective inspector, both of whom always seem to be there for her, Lucy finds her life getting more complicated than a triple cable cardigan. The only one who seems to know what's going on is her cat . . . or is it . . . her familiar?

This one had a slow start but an excellent second half. I love the weirdly original premise of the story. There was excellent characterization and fun magic. I look forward to listening to the next in this series. Great narrator, too.

a cozy mystery of sorts never been into vampires much but this story does a good job of humanizing them. I don't knit but am an advid crocheter and like the references to patterns, yarn and finished items. my fibro causes me to be a bit of an insomniac and I like listening to this type of story when I'm not sleeping. while the story does hold my interest i find the sleep timer is a great tool. if I do nod off I can easily find my place to listen some more. I wish I could find a bundle deal for this series of books as I am eager to to read the rest of the set.

I had no idea what to expect from this book but I am happy to say it exceeded my expectations! I’m not typically drawn toward vampire themes but this one was delightful. A great plot and fun twists throughout. I think I’ll try the next book in the series!!

I absolutely loved this book. Easy to listen to the characters draw you in straight away. Downloaded the second in the series already.

Brilliant idea, brilliant writing it was hilariously different. I love it!!

I wasn't sure what to expect but this is a great book and they even seem to get better as I am several books in now. The narration is perfect for the storyline. I listen while I work and when driving home. I highly recommend! Love the kitten!