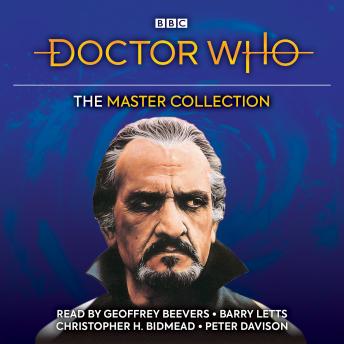 In Doctor Who and the Doomsday Weapon by Malcolm Hulke, the Master has stolen the Time Lord's files on a weapon which could make him ruler of the Galaxy.

In Doctor Who and the Daemons by Barry Letts, secret ceremonies have been designed to conjure up a horribly powerful being from another planet.

Doctor Who and the Sea-Devils by Malcolm Hulke finds the Master aiding and abetting members of a submarine colony who plan to seize control of the Earth.

In Logopolis by Christopher H Bidmead, even the Master is horrified by the threat of total chaos he unintentionally precipitates, and in Castrovalva by the same author he devises a trap for a newly regenerated Doctor.

Doctor Who and the Daemons is written and read by Barry Letts. Novelisation © Barry Letts & Guy Leopold 1974