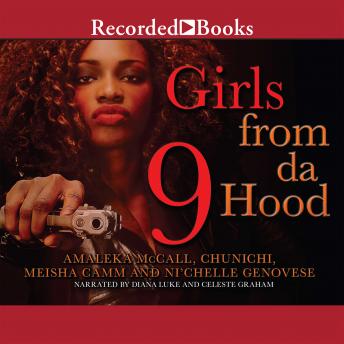 #9 of Girls from Da Hood

Cheyenne and Kelsi grew up together in the hood. They' re best friends who' ve always had each other' s backs-- until Cheyenne' s father is released from prison and Kelsi can' t resist his advances. Their scandalous affair might do more than just tear apart a friendship;it could destroy Cheyenne' s whole world. Angela Farmer' s early childhood was filled with neglect and abuse at the hands of her drug-addicted mother. Not even the love and support of her foster parents could totally erase her painful memories. In an effort to rid herself of her demons, Angela makes it her mission to protect others, but her methods strike fear in the hearts of the people around her. Eva is a good, churchgoing girl who seems to have the perfect life, until she' s wrongly accused of embezzling from her clients. Caught up in a struggle to prove her innocence, she is forced to face the grittier side of life. She enters into a sexually charged world fueled by power, murder, and greed, where she must adapt if she' s going to survive. Eva wants to remain true to herself and everything she' s been taught in the church, but like Jay Z says, ' When church is over, life begins.'

This title is due for release on April 11, 2014
We'll send you an email as soon as it is available!