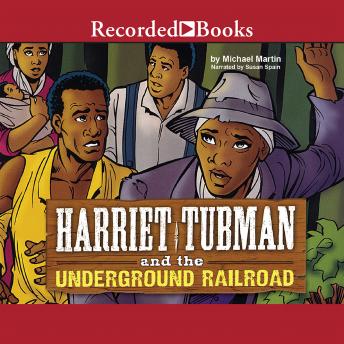 Harriet Tubman and the Underground Railroad

When Harriet Tubman was born a plantation slave in 1820, her parents hoped she could learn a trade and be spared from working in the fields. But because she defended a slave against an overseer, she became a field hand anyway. As she learned to survive in the woods and find her way by the North Star, she dreamed of freedom. When she was almost 30, she finally made her escape-but securing her own freedom wasn't enough. Risking life and limb, she became a conductor on the Underground Railroad to help other slaves flee to safety. A symbol of strength and hope, this legendary 'Moses' led over 300 of her people to freedom and a new life. In an ALCS Notable Recording, Peter Francis James' dynamic narration enhances the poignancy of Ann Petry's lilting prose and helps inspire millions with the compassion, bravery, and moral integrity of a true American hero. 'An unusually well-written and moving life of the 'Moses of her people.''-Horn Book Magazine '[In 1955] Ann Petry brought the world to its feet with the artistry in this painfully honest and wrenching novel. Once again a standing ovation is due for this American classic.'-Philadelphia Inquirer

Harriet Tubman and the Underground Railroad