Lies the Government Told You: Myth, Power, and Deception in American History 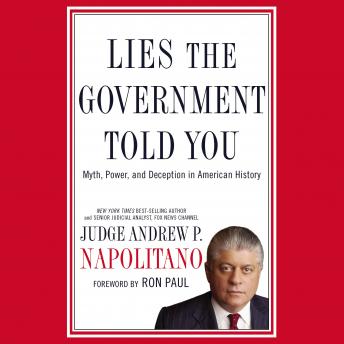 YOUÆVE BEEN LIED TO BY THE GOVERNMENTWe shrug off this fact as an unfortunate reality. America is the land of the free, after all. Does it really matter whether our politicians bend the truth here and there?When the truth is traded for lies, our freedoms are diminished and donÆt return.In Lies the Government Told You, Judge Andrew P. Napolitano reveals how AmericaÆs freedom, as guaranteed by the U.S. Constitution, has been forfeited by a government more protective of its own power than its obligations to preserve our individual liberties.ôJudge NapolitanoÆs tremendous knowledge of American law, history, and politics, as well as his passion for freedom, shines through in Lies the Government Told You, as he details how throughout American history, politicians and government officials have betrayed the ideals of personal liberty and limited government.'ùCongressman Ron Paul, M.D. (R-TX), from the Foreword

Lies the Government Told You: Myth, Power, and Deception in American History