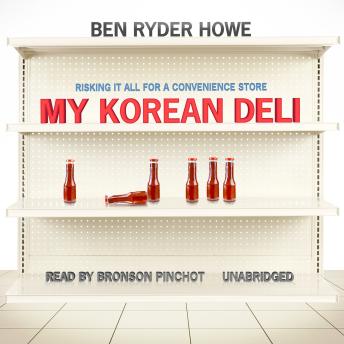 My Korean Deli: Risking It All for a Convenience Store

This sweet and funny tale of a preppy editor buying a Brooklyn deli with his Korean in-laws is about family, culture clash, and the quest for authentic experiences.
It starts with a gift. When Ben Ryder Howe’s wife, the daughter of Korean immigrants, decides to repay her parents’ self-sacrifice by buying them a store, Howe, an editor at the rarefied Paris Review, agrees to go along. Things soon become a lot more complicated. After the business struggles, Howe finds himself living in the basement of his in-laws’ Staten Island home, commuting to the Paris Review offices in George Plimpton’s Upper East Side townhouse by day, and heading to Brooklyn to slice cold cuts and peddle lottery tickets by night. My Korean Deli follows the store’s tumultuous life span, and along the way paints the portrait of an extremely unlikely partnership between characters with shoots across society, from the Brooklyn streets to Seoul to Puritan New England. Owning the deli becomes a transformative experience for everyone involved as they struggle to salvage the original gift—and the family—while sorting out issues of values, work, and identity.

My Korean Deli: Risking It All for a Convenience Store