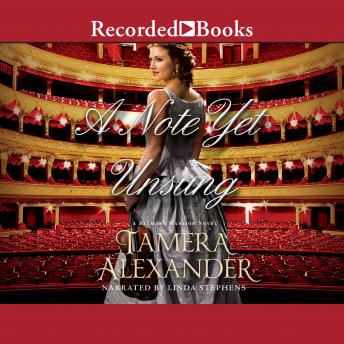 A Note Yet Unsung

A master violinist trained in Vienna, Rebekah Carrington manages to wheedle her way into an audition with the Maestro at the newly formed Nashville Philharmonic. But women are 'far too fragile and frail' for the rigors of an orchestra, and Rebekah's hopes are swiftly dashed. Because the conductor--determined to leave his mark on the world of classical music--bows to public opinion. To make matters worse, Adelicia Acklen Cheatham, mistress of Belmont Mansion and Rebekah's new employer, agrees with him. Nationally acclaimed conductor Nathaniel Tate Whitcomb is Nashville's new orchestra leader. And despite a reluctant muse--and a strange buzzing and recurring pain in his head--he must finish composing his symphony before the grand opening of the city's new opera hall. But far more pressing, he must finish it for the one who first inspired his love of music--his father, who is dying. But Tate's ailment worsens. He knows Rebekah can help him finish his symphony. But how do you win back a woman's trust when you've robbed her of her dream? 'As music moves us to tears yet makes our hearts soar, A Note Yet Unsung captures the splendor of classical music at a time when women's hard-won strides in cultural issues changed not only world history--but the hearts of men.'