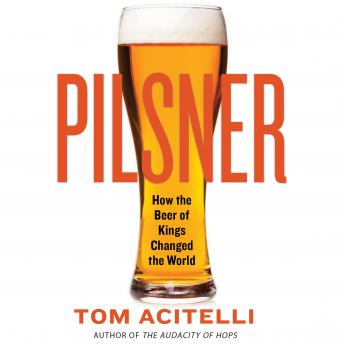 Pilsner: How the Beer of Kings Changed the World

On the night of April 17, 1945, Allied planes dropped 111 bombs on the Burghers' Brewery in Pilsen, Czechoslovakia, destroying much of the birthplace of pilsner, the world's most popular beer style and the bestselling alcoholic beverage of all time. Still, workers at the brewery would rally so they could have beer to toast their American, Canadian, and British liberators the following month.It was another twist in pilsner's remarkable story, one that started in a supernova of technological, political, and demographic shifts in the mid-1800s and that continues in the craft breweries of today. Tom Acitelli's Pilsner: How the Beer of Kings Changed the World tells that story.Pilsner shatters myths about pilsner's very birth and about its immediate parentage. Acitelli, author of the craft beer history The Audacity of Hops and the James Beard finalist American Wine, also pops the top on new insights into the pilsner style and into beer in general through a character-driven narrative that shows how pilsner influenced everything from modern-day advertising and marketing to today's craft-beer movement.

Pilsner: How the Beer of Kings Changed the World