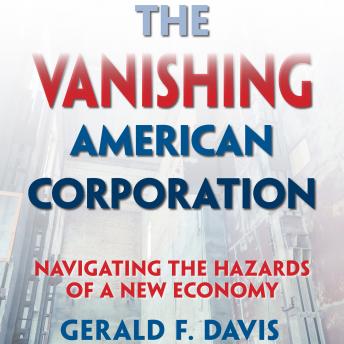 The Vanishing American Corporation: Navigating the Hazards of a New Economy

It may be hard to believe in an era of Walmart, Citizens United, and the Koch brothers, but corporations are on the decline. The number of American companies listed on the stock market dropped by half between 1996 and 2012. In recent years we've seen some of the most storied corporations go bankrupt (General Motors, Chrysler, Eastman Kodak) or disappear entirely (Bethlehem Steel, Lehman Brothers, Borders).

Gerald Davis argues this is a root cause of the income inequality and social instability we face today. Corporations were once an integral part of building the middle class. He points out that in their heyday they offered millions of people lifetime employment, a stable career path, health insurance, and retirement pensions. They were like small private welfare states.

The businesses that are replacing them will not fill the same role. For one thing, they employ far fewer people—the combined global workforces of Facebook, Yelp, Zynga, LinkedIn, Zillow, Tableau, Zulily, and Box are smaller than the number of people who lost their jobs when Circuit City was liquidated in 2009. And in the “sharing economy,” companies have no obligation to most of the people who work for them—at the end of 2014 Uber had over 160,000 “driver-partners” in the United States but recognized only about 2,000 people as actual employees.

Davis tracks the rise of the large American corporation and the economic, social, and technological developments that have led to its decline. The future could see either increasing economic polarization, as careers turn into jobs and jobs turn into tasks, or a more democratic economy built from the grass roots. It's up to us.

Vanishing American Corporation: Navigating the Hazards of a New Economy

This title is due for release on May 2, 2016
We'll send you an email as soon as it is available!